CodeinWP content is free. When you purchase through referral links on our site, we earn a commission. Learn more
Home / Blog / New Tags Coming to the WordPre...

According to our small survey, 90% of users say they don’t care if a free plugin they’re getting from the directory is only a limited, “lite” version of the fully-featured PRO.

Okay, I might have BuzzFeeded the stats a bit here. The exact question we asked was, “Would you not use a WordPress.org plugin, just because it has a PRO version also available?” Again, 90% said “no.”

“Wait, what is this about anyway?!”

Okay, let’s rewind to the beginning:

What’s up with the new WordPress plugin tags

The whole thing started several months ago when Matt Mullenweg encouraged the WordPress community to brainstorm some ideas on how to improve the way plugins are presented in the official repository:

In short, the main goals:

In today’s WordPress ecosystem, with more than 45,000 plugins in the repo, it gets harder and harder to find the right one, and many of them just don’t live up to the expectations.

And I have to give it to Matt, what he’s saying really strikes a chord and sums up two crucial problems with many free plugins these days.

This can be frustrating. Basically, whenever you need a new plugin to solve a problem that you haven’t faced before, you never know what to expect. You’re probably in a hurry, you’re excited to find a free plugin that says it handles the task, only to realize that it’s, in fact, just a bridge between the site and a third-party service and/or that you need to spend money to unlock the key functionality (“If I wanted to pay, I’d go straight to CodeCanyon, wouldn’t I?!”).

Anyway, a couple of weeks after Matt’s suggestions, Samuel Sidler published this awesome post detailing the possible steps that can be taken to make the plugin directory better and more user-friendly.

One of the things he proposes is to use a new taxonomy called “business model” meant to indicate the business model that the plugin operates under.

Also, plugins that are fully free, self-contained and with no PRO versions available wouldn’t need to add either.

Along with those tips, there was also an example prototype built by Mark Uraine to present how those new tags could appear on a plugin’s page: 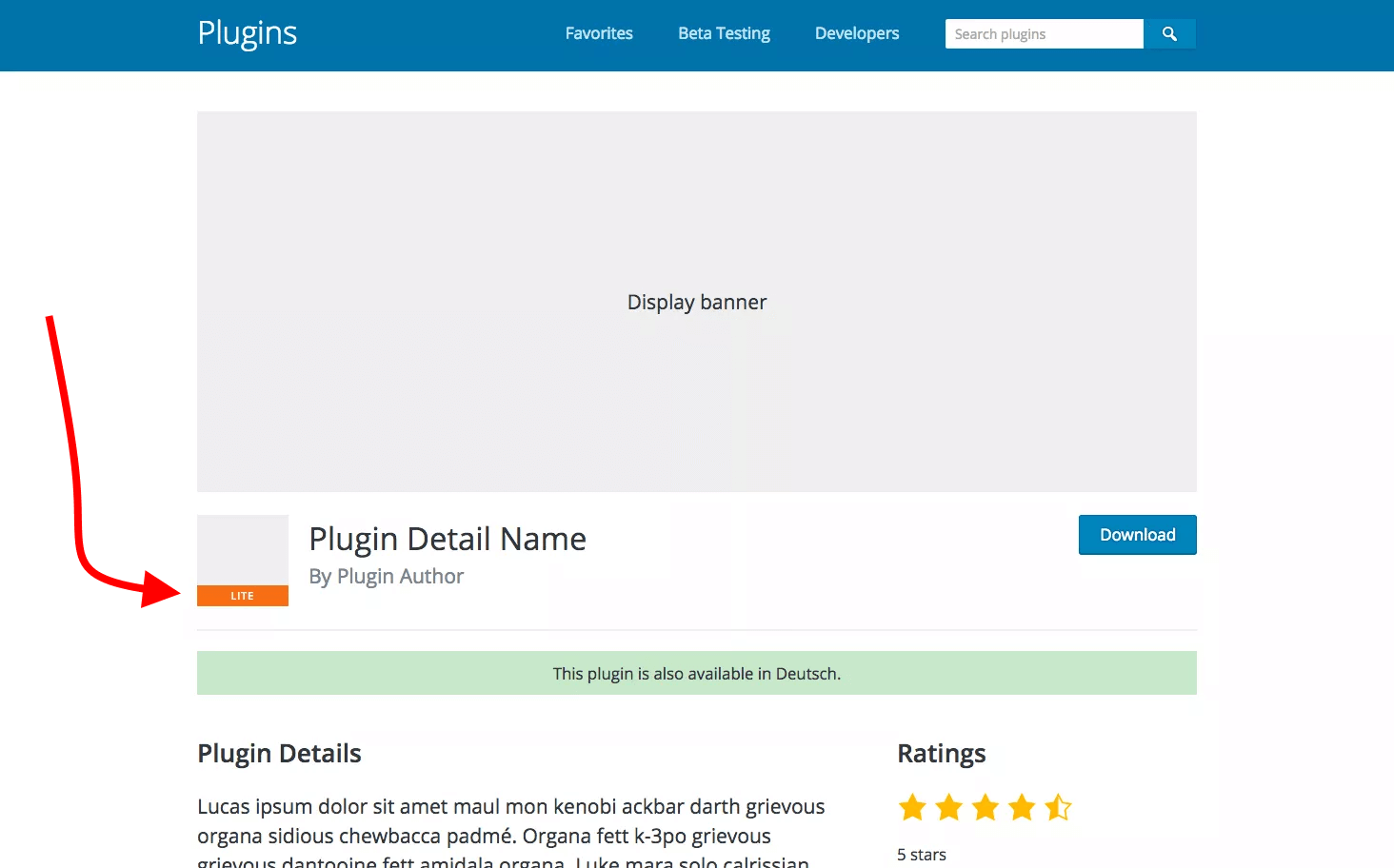 What’s for sure is that things have been gaining some momentum, so we might see these tags implemented in some form in the near future.

How the new tags can help

What’s worth pointing out first is that 73% of our survey respondents think that the new tags will somewhat improve everyone’s experience, and 41% think that they will improve it a lot. In short, people are on board.

Personally, I have to admit that I’m very enthusiastic about these new tags, and I do believe that they can be really helpful. Under one condition, though. The tagging process probably needs to be enforced for every submission and verified by someone (an admin, likely). And that is problematic.

I mean, the tags are only going to be useful if they’re assigned accurately. In other words, the first time you stumble upon a plugin that’s been wrongly tagged, you lose trust in the whole scheme and stop paying attention to the tags altogether.

At the same time, making sure that everything’s tagged properly is a massive amount of work. That’s work which I assume no one is willing to do.

On the one hand, we could count on the developers to use these tags accurately themselves, but simply not everyone is interested in doing that. At least not yet.

And it’s not hard to see why. Until those become mandatory, why would you want to mark your plugin as “lite” and risk that it will repel people and impact your downloads.

Plus, there’s another problem / not-problem here, depending on the way you look at it. Mainly, those tags are likely only going to be noticed and understood by users in the know. For a beginner, just a small badge under the developer’s icon (like it is in the current prototype) provides very little insight into what it actually stands for.

Again, whether that’s a problem or not is debatable. After all, not every new improvement has to resonate with every type of user. Speaking to the more experienced ones is also a great step to take.

Do people care about PRO and LITE plugins?

Like I said at the beginning, 90% of our respondents will still download a plugin, even when it’s just a stripped-down version of the PRO. But what that also means is that 10% are going to have second thoughts.

So the devil is in the details. While the tags might not have impact on the grand scheme of things, having potentially 10% less downloads and thus potentially 10% less revenue will surely be noticeable for individual developers. And, let’s be honest, it might cost some jobs.

But setting the tags aside, let’s take a look into PRO and LITE plugins themselves. More specifically, what people really expect from a LITE plugin vs PRO.

From our survey: “What do you expect from a PRO plugin?”

Building a PRO #WP plugin? 68% of users expect *more* and *better* features than what's in LITE
Click To Tweet

The answers are very interesting, and they reveal a somewhat uncomfortable truth about what the developers pitch as the benefits of PRO vs what people really want.

Firs off, everybody wants more and better features. This is obvious, and expected. And it surely is the right path for a developer to take when cooking up a PRO plugin: (1) take your free plugin, (2) improve the existing features, (3) add new features.

On the other end of the spectrum, however, we have things like frequent updates and exclusive news/content from the developer. Nobody cares about those for the most part.

I’m not even surprised that people don’t care about updates. People just want their plugin to work out of the box. They don’t care what’s coming in the future. They want what’s here today to work properly already.

Finally, we had one more question in the survey: “Considering that totally free plugins are impossible to maintain in the long term, what kind of model would you prefer?”

Freemium plugins seem to be the standard nowadays. I’m surprised that donations are not at the very bottom, though.

Can we see something similar in the themes directory?

Normally I would say that it’s probably not very likely. But like with most things, we’re only a Matt’s comment away from something being seriously considered, so who knows.

What’s certain, though, is that a lot of people would indeed like to know that the theme they’re getting is only a “lite” version.

Here’s a quick survey we did on JustFreeThemes: “Would you like to know if a free theme has a PRO version?” (514 respondents)

This is surely a valuable insight, but still a topic for another time.

Should you use the new plugin tags?

I leave this one up for debate, and please share your thoughts in the comments section below.

When it comes to me, though, it’s tough. I have my own opinion, but I also somewhat don’t agree with it. Bear with me:

On the one hand, I know that the tags make the expectations clearer and the plugin directory easier to navigate for the user. But on the other, would I risk getting less downloads by labeling my plugins “lite”? Probably not. Unless not until assigning them is mandatory.

Let’s face it, no one really wants to use a “lite” version of anything. The term “lite” suggests less features all in itself. So it’s hard to consider the “lite” label an additional selling point. It’s an obstacle. A repellent.

In that light, we should probably give developers some additional perk/benefit if they do decide to use the “lite” tag. For instance, one possibility that comes to mind is to also give them a dedicated box or space on the page where they could link to the PRO version of their plugin. So in this case, yes, you are warning people that your plugin is stripped of some features, but you’re also getting a possibility to tell them about the full version.

Of course, this is just an idea. Hardly the right final solution.

But that’s just me. What do you think about this whole thing with the new WordPress plugin tags? Are they a good addition to the plugin directory?

P.S. If you want to take part in that survey of ours, you still can (go here). I will keep the post updated to reflect the newest input from the readers.