Staying current with some SEO vs. WordPress site speed concerns can be a burden. After all, keeping on top of the various moving parts of a successful site is tricky enough, without worrying about which one of over 200 ranking signals is currently making a difference in the SERPs.

One SEO signal that’s gotten a lot of attention over the last few years is site speed. We all know we should be making our sites faster, but how much difference does it really make in terms of SEO?

In this piece, we’ll round up a number of external studies and look at our own suite of sites to get to the bottom of how much WordPress site speed really moves the needle out in the wild. By the time we’re done, you’ll have a much clearer idea of how much of your efforts you should be devoting to it.

Bonus info: Just wanted to let you know that we have a whole crash course on speeding up your WordPress site. With some simple fixes, you can reduce your loading time by even 50-80%. It’s free, check it out by clicking here.

Let’s kick things off with a quick look at the official line on the subject:

The official line on site speed and SEO

Google’s 2010 announcement of site speed as a ranking factor put it on site owners’ radars worldwide, but the actual details revealed were characteristically opaque.

Citing previous internal studies, Google confirmed that site speed would be added into the mix of existing ranking signals, but stopped short of discussing how much weight it would actually carry. A number of points were, however, stressed from the outset:

In the years since that initial announcement, the importance of site speed from a user perspective has become crystal clear. Study after study from the likes of Walmart, Akamai, and Amazon have consistently driven home the point that users treasure fast loading and response times. The exact role site speed plays in SERP results, however, has remained somewhat confusing. Witness, for example, the list of massively bloated sites that continue to rank highly across the web. 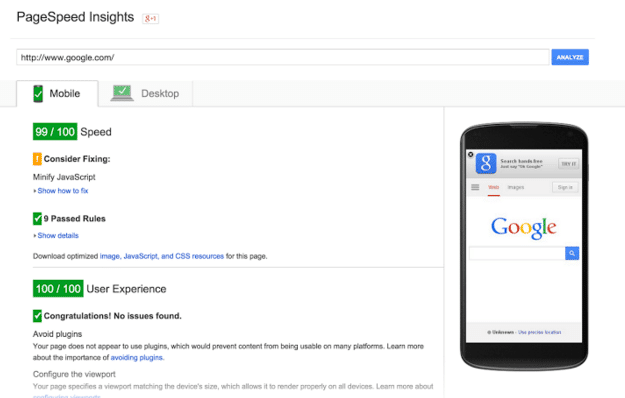 There’s no doubting Google’s commitment to quickness as an overall goal, however. From Google DNS to Google Fiber, and PageSpeed Tools to the recently announced AMP Project, speed is at the core of many of the search giant’s more high-profile projects. And though they’ve yet to clarify the exact weighting of site speed in search engine results, that hasn’t stopped others from trying to do so.

With that in mind, let’s move on to what third party studies have revealed on the matter:

The data on site speed to date

Though hard numbers are thin on the ground, a small number of studies have attempted to quantify the role of site speed for SEO since 2010.

Moz.com weighed into the debate in 2013 with a landmark investigation analyzing 2,000 random search results across over 100,000 pages in order to ascertain what role, if any, site speed played.

The first point to emerge was that the term “site speed” itself is slightly nebulous. Moz’s study seemed to indicate that neither the document complete time (how long before you can interact with the page) nor the fully rendered time (time taken for all elements to fully load) played a significant role in search engine rankings.

In another surprising result, overall page size and the average amount of image content were also both shown to make little appreciable difference to search rankings.

The study did, however, show a clear correlation between the Time to First Byte (TTFB) and search rank position. There was a slight hedging of bets in Moz’s overall summary of their findings, but they eventually recommended concentrating on a combination of back end improvements aimed at reducing TTFB, and front-end improvements based on keeping users happy.

A 2014 study by Polish researchers at the University of Poznan broadly backed up both Moz’s conclusions and Google’s assertion that site speed is not as important for SEO as overall relevance. Overall page load time again showed no correlation with ranking, but this study did seem to indicate that crawl time was being used as a ranking factor.

The Poznan team’s findings suggested that, all other factors being equal, crawl time variability was being used as a decisive factor in ratings, and that its overall weight as a ranking factor was somewhere between 0.35% and 1.04%.

More recently, a 2016 Backlinko study took a bigger picture view in examining over one million results to identify the most significant current ranking factors. Though the study revealed that faster loading sites tended to appear higher in search rankings, the authors stopped short of identifying a definite correlation. Factors such as link authority, number of links, relevance and content length were all taken to be substantially more significant.

Editor’s note. While working on this resource, we also reached out to Daniel Ene of Agile Media, and asked what he thinks of the whole site speed vs. SEO thing. Here’s what he had to say:

From my experience, loading time, although Google states that it’s a ranking factor, I don’t see major correlations between average page load time and high rankings.

Now, I’m not saying that you should not take into consideration your loading time, because you may upset your users. Think of yourself, do you like to wait 20, 30 or 40 seconds for a webpage to fully load?

That being said, Daniel suggests that links are still perhaps a better investment if you have a limited SEO budget:

Links play a major role in overall ranking. Let’s say that your average loading time is 10 seconds, and all of your competitors’ sites load in only 5 seconds. But you have 100 links and they have only 50 links. Considering the link value equal, who do you think will rank #1?

So, from the few in-depth studies that have been done on the subject, it seems that site speed is being paid attention to, but is far from being a decisive ranking factor for SEO.

Would that be the story on our own sites?

Our own findings on Themeisle, CodeinWP and JustFreeThemes

Next, we turned to our own stable of live sites (ThemeIsle, CodeinWP, and JustFreeThemes) to see if any correlation or causation could be drawn between WordPress site speed and overall organic search performance.

Looking at traffic figures dating back to early 2014, all three sites have shown a healthy ongoing increase in organic traffic, with occasional seasonal dips around Christmas.

In terms of WordPress site speed, however, there has really only been one major initiative undertaken in that time period: a hosting move to Pagely along with the addition of Varnish caching back in April 2015. Though this didn’t have a major impact on overall page load times, it did slash our Time to First Byte from 1.6s to 0.1s on, for example, Themeisle. 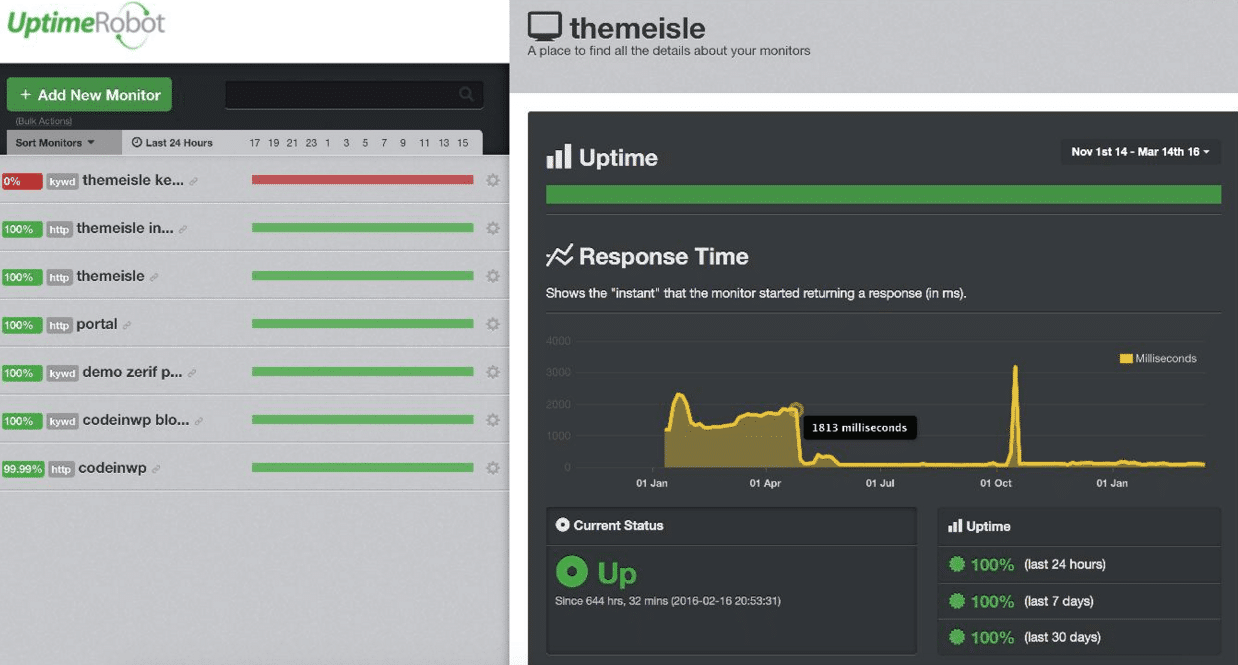 A large reduction in TTFB following the move to Pagely.

A quick look at a six-month slice of organic traffic around that time shows little to no obvious impact, however – a story that was repeated on the other two properties.

All things considered, it’s extremely difficult to pull out any major impact that WordPress site speed has had for SEO in isolation on any of our three flagship properties over the course of the last two years. We’ve still certainly got a lot of work to do in terms of overall page load time to deliver as snappy an experience as possible for our users, but there’s nothing to suggest that we’ve either been punished for relatively laggardly total load times, or rewarded for our work on reducing Time to First Byte. 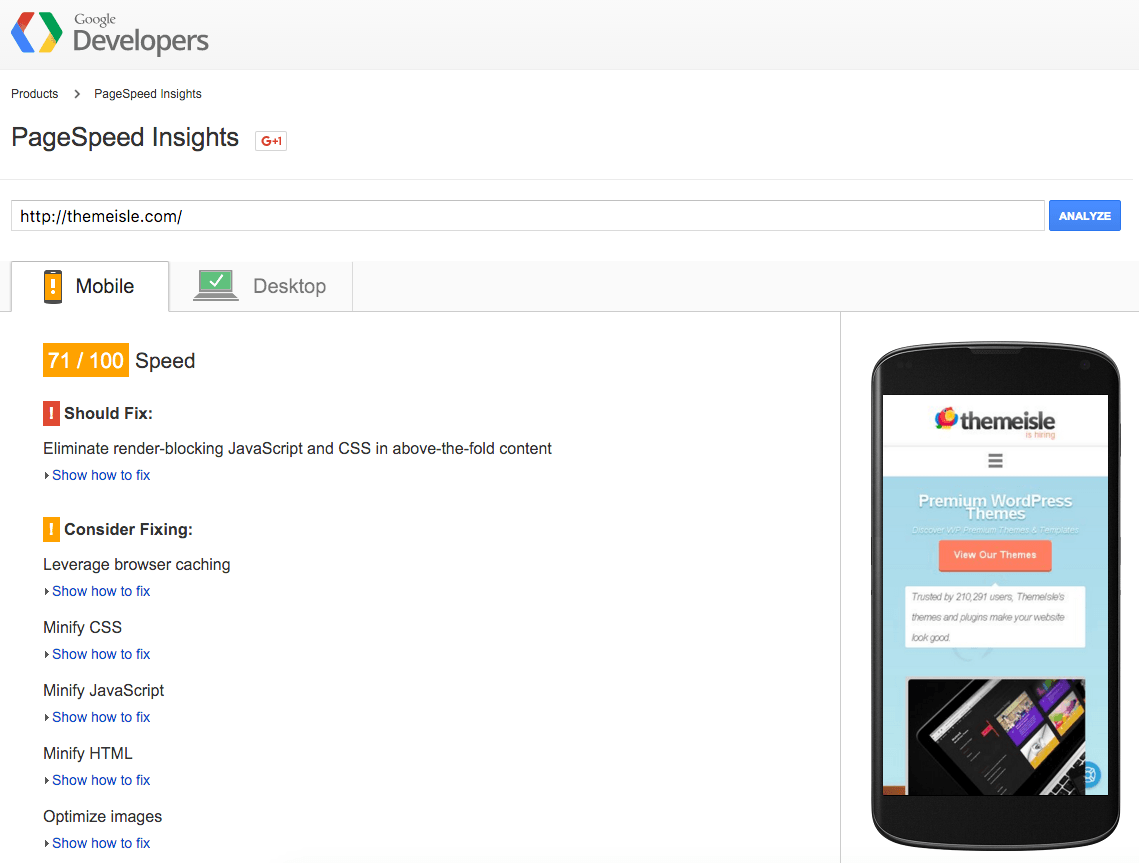 Themeisle PageSpeed results show further optimizations could still be made.

Studies such as those from Moz (and Google’s own hints) are enough to show that site speed is definitely in the mix as a ranking factor, but there is nothing to suggest it has a weight of anything significantly more than 1%. These studies, and our own findings across local sites, also suggest that overall page load time is not the SEO killer many make it out to be.

Taken together with Backlinko’s detailed investigation of wider ranking factors, it seems safe to assume that relevance and authority remain the driving forces in terms of organic traffic.

That said, users consistently demand fast-loading sites, and the potential negative impact of site speed on conversions is well-proven at this stage. With the rise of mobile showing no signs of slowing, this need for speed is going to remain.

Our practical advice for site owners is to start with as fast a web hosting stack as possible at the outset, and then immediately double down on content and connecting with other sites. After the traffic tap is on, it then makes sense to return to the subject of site speed optimization, once you have numbers where you can really measure its impact.

And, you know, if you’re using WordPress, then try using an SEO optimized theme.

Site speed is clearly a major concern for Google, and one of many factors they are actively monitoring at any given time. Our research indicates, however, that its actual weighting amongst ranking factors is relatively low at present, so uber-optimization shouldn’t be at the very top of your to-do list.

That said, ongoing optimization is a lever you can constantly pull as a site owner, and a structured approach to doing so in terms of site speed will pay off handsomely for you and your users down the road. With that in mind, sign up today for our free WordPress site speed email course (below) for practical tips on doing so.

We’d also love to hear your feedback on WordPress site speed generally as it relates to SEO. Are there reports or studies we’ve missed, or do you have tricks you can share? Get in touch via the comments below and let us know!