CodeinWP content is free. When you purchase through referral links on our site, we earn a commission. Learn more
Home / Blog / CSS Selector Types

Knowing the full range of CSS selector types available when writing modern CSS today is crucial to using CSS to the fullest.

In the past 10 years or so, the official specification has added a number of different CSS selectors and many of those selectors have strong support across all modern browsers.

So in this complete guide to CSS selector types, I hope to offer a selector toolset that you can comfortably use in all your production sites. I’ll also include some useful code snippets to assist your learning and remembering these selectors. 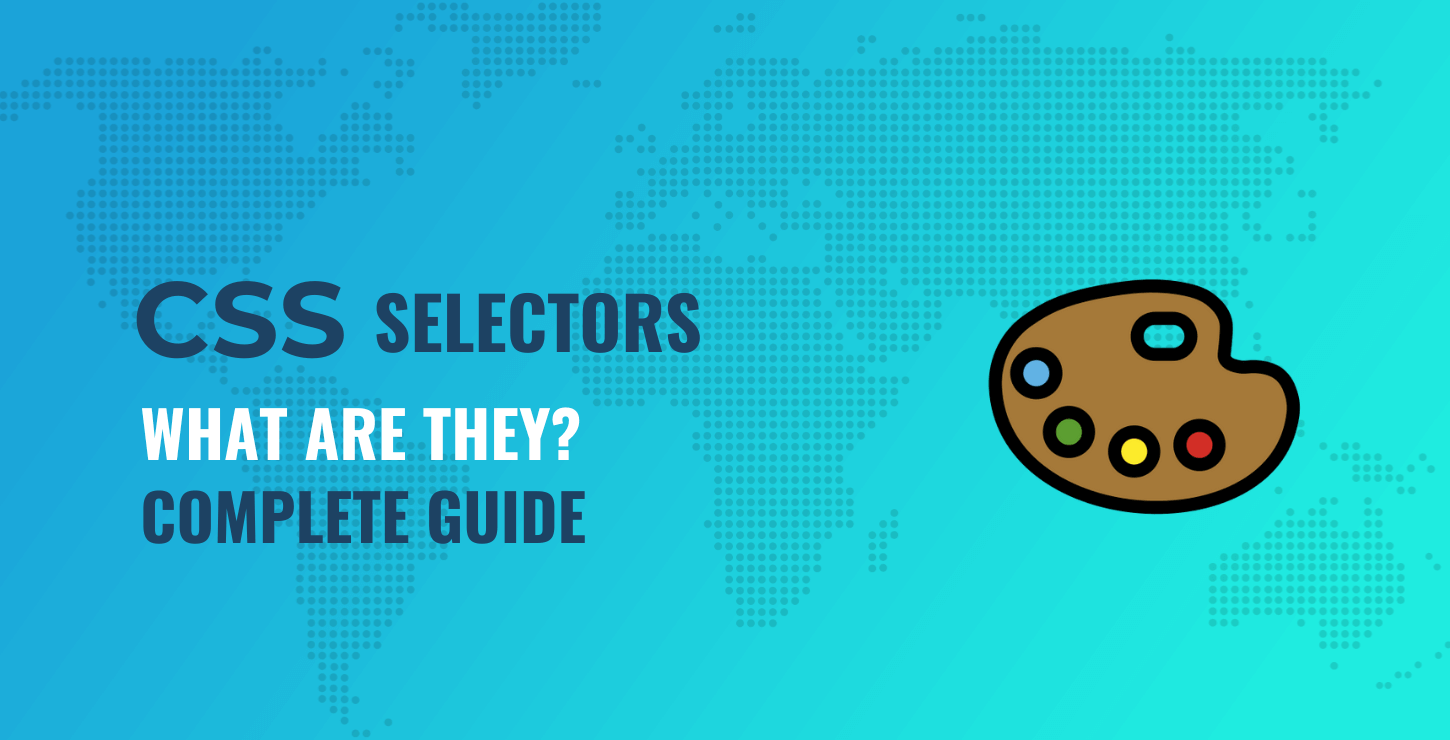 Here’s what we’re going to cover:

The universal selector, as the name suggests, selects all elements. You can use it on its own or along with another selector. It’s declared using the asterisk characters (*).

The above selects all child elements (including deeply nested elements) of <section> elements. Another example that’s a little more complex might be:

In the above example, I’m selecting all span elements that are inside any element that are children of <footer> elements. You won’t see this type of use for the universal selector very often, as it’s quite unintuitive.

The type selector, also referred to as an element type selector, selects elements based on the element’s tag name in the HTML. Below are a few examples:

The above includes two CSS rules that apply CSS to all <span> elements or all <article> elements. You can target any valid HTML element using its equivalent type selector name.

You can also technically invent HTML tag names, then use the custom name in your CSS. For example, you could have this in your HTML:

Then the following in CSS:

The above works, but it is strongly recommended not to do this. If you need a generic HTML element, use <div> or <span>, then use classes and data attributes as needed to customize it.

Nonetheless, the above should illustrate how the type selector works from a CSS standpoint.

The class selector is the most-used and most useful of all CSS selector types. It’s declared using a dot (.) followed by a custom name that must exist as a class attribute in your HTML.

In your CSS you can target the above element using the class selector as follows:

The HTML included two different class names in the class attribute, so I was able to target the same element using separate class selectors.

The class selector is the basis for CSS methodologies like OOCSS, BEM, and SMACSS. This selector type is also the foundation for popular CSS frameworks like Bootstrap and Tailwind.

You can create atomic styles using the class selector. These types of styles, often called single-purpose utility classes, are reusable and can serve as building blocks for complex CSS projects. The number of class names you can include in a single HTML class attribute is more or less unlimited. Thus, the class selector serves a powerful foundation for many frameworks today.

The class selector is also powerful because you can reuse a class name multiple times on a single page, making it versatile and flexible.

The ID selector is declared using the pound symbol (#) followed by a custom name. This selector will match an HTML element that uses the same name as a value for the id attribute.

And the following CSS would target the above element:

Use of the ID selector is strongly discouraged for multiple reasons:

While most developers today discourage use of the ID selector, the id attribute is encouraged in HTML for defining in-page anchors as well as for JavaScript hooks. Use class names or other selectors instead of the ID selector, to ensure CSS is as maintainable as possible.

The attribute selector is a fairly underused and underappreciated CSS selector type. You write this selector using square brackets ([]) and the value inside the brackets should match an HTML attribute.

For example, suppose you have the following HTML:

This CSS targets all <a> elements that have a title attribute. You can use the attribute selector on its own with no other selector present:

The above targets all elements that have a title attribute, regardless of what element type they are.

Attribute selectors with operators and flags

Usefully, you can declare the attribute selector’s value using a number of different operators and flags. Below are examples of each.

This uses the starts-with operator (^) to target all anchor elements with an href attribute that starts with # (the hash or pound sign):

The following uses the wildcard operator to target all anchor elements with an href attribute that has the word “downloads” anywhere in its value:

Next I’ll use the case-insensitivity flag (i) to target all anchor elements with an href attribute that has the word “downloads” anywhere, regardless of capitalization:

This next code uses the case-sensitivity flag (s) to target all anchor elements with an href attribute that has the word “Blog” anywhere in the URL, with strict capitalization:

Finally, the following uses the ends-with operator ($) to target all anchor elements with an href attribute that ends with “.pdf”:

You can use the above snippet to add an icon next to the link, dependent on the file type of the URL.

There are a number of different characters that work as combinators that are not technically “selectors” but they work along with selectors. These let you to target specific elements in certain contexts.

The descendant combinator is the space character that separates two selectors. In the following code, the selector targets all anchor elements that are children of paragraph elements.

Children targeted are immediate children and any grandchildren, no matter how deeply nested.

You declare a child combinator using the greater-than symbol (<). It’s similar to the descendant combinator but allows you to select only the direct child elements of the element to the left of the combinator.

For example, the following will select all <div> elements that follow .module and share the same parent as it (i.e. they are siblings):

This means in the following HTML, only the latter two <div> elements will qualify for the styles, even though the first <div> is also technically a “sibling”:

The adjacent sibling combinator is defined using the plus sign (+). With this combinator, you can select an element that immediately follows the first element. For example, one common use case for this CSS selector type is indenting paragraphs:

Although most paragraphs on the web are double spaced with no indenting, many blogs will use the method common in print publications (that is, indenting paragraphs that follow paragraphs). This is achieved using the CSS above via the adjacent sibling combinator. Thus, the above CSS will only apply the indent to paragraphs that immediately follow another paragraph. The first paragraph inside the parent will not be selected.

There are a whole slew of pseudo-classes available to style different elements and parts of a web page. A pseudo-class selects based on a state rather than the existence of an element. Pseudo-classes are defined using a single-colon, followed by the pseudo-class name.

If the psuedo-class is placed directly following another selector (e.g. a:link) it will style the specified state only on the targeted selector. If there’s a space between the selector and the pseudo-class (a :link), it becomes two selectors separated by a descendant combinator.

Below is a list and brief description of the most common pseudo-classes:

There are also some functional pseudo-classes that allow you to pass in a list of selectors. Based on the list provided, this type of pseudo-class will either style or avoid styling the elements passed in.

There are a number of other pseudo-classes, many added to the specification in more recent years with weaker browser support. You can see a comprehensive list on MDN.

Pseudo-elements are declared using a double colon (::) followed by the pseudo-element name. As the word “pseudo” suggests, these selectors target what more or less amount to imaginary elements on the page.

The most common pseudo-elements are briefly described below:

Pseudo-elements should be used with care, particularly ::before and ::after. These can inject text content into the page that’s not accessible to screen readers. Thus, these selectors should only be used for decorative elements that aren’t critical to the main content.

It should also be noted that some pseudo-elements previously were supported using the single-colon syntax (e.g. :before). These will still work in most browsers for legacy reasons but it’s recommended to always use the double-colon syntax to differentiate them from pseudo-classes.

There are some other pseudo-elements that are lesser-known with weaker browser support that are listed on MDN.

As many of the code examples in this article have shown, CSS selector types can be combined to create all sorts of possibilities when targeting elements.

Finally, one of the most common ways to combine selectors is using one or more commas (,). Note the following example:

The above is called a selector list. This will target any of the elements represented by one or more of the listed selectors separated by commas.

In the above example, even if a page has no <section> elements, it will still target the <article> and <div> elements. This is a common technique to avoid repeating CSS for multiple selector rules. This allows you to use one set of properties for a single CSS rule.

Learning the different CSS selector types takes some time and experience. Remember to do your best to keep selectors simple. The more selectors you include in a combined selector, the harder it will be to maintain your CSS. Class selectors are always the safest to use to help with this.

I hope this review of the different selector types has helped you and given you some powerful tools to use for your next CSS project.

Let us know if you have any questions on how these things work or if any of the above advice is unclear in any way.

Layout and presentation by Karol K.