If you’re in the market for a cheap dedicated server hosting, then you likely know your way around some of the more popular providers. The problem is that many of them require you to pay through the nose for the privilege of having a server all to yourself.

That’s only logical, considering providers need to offset expenses in one way or another. However, if you do a little digging, you’ll find there are some dedicated server hosting plans that don’t cost an arm and a leg. 🦵 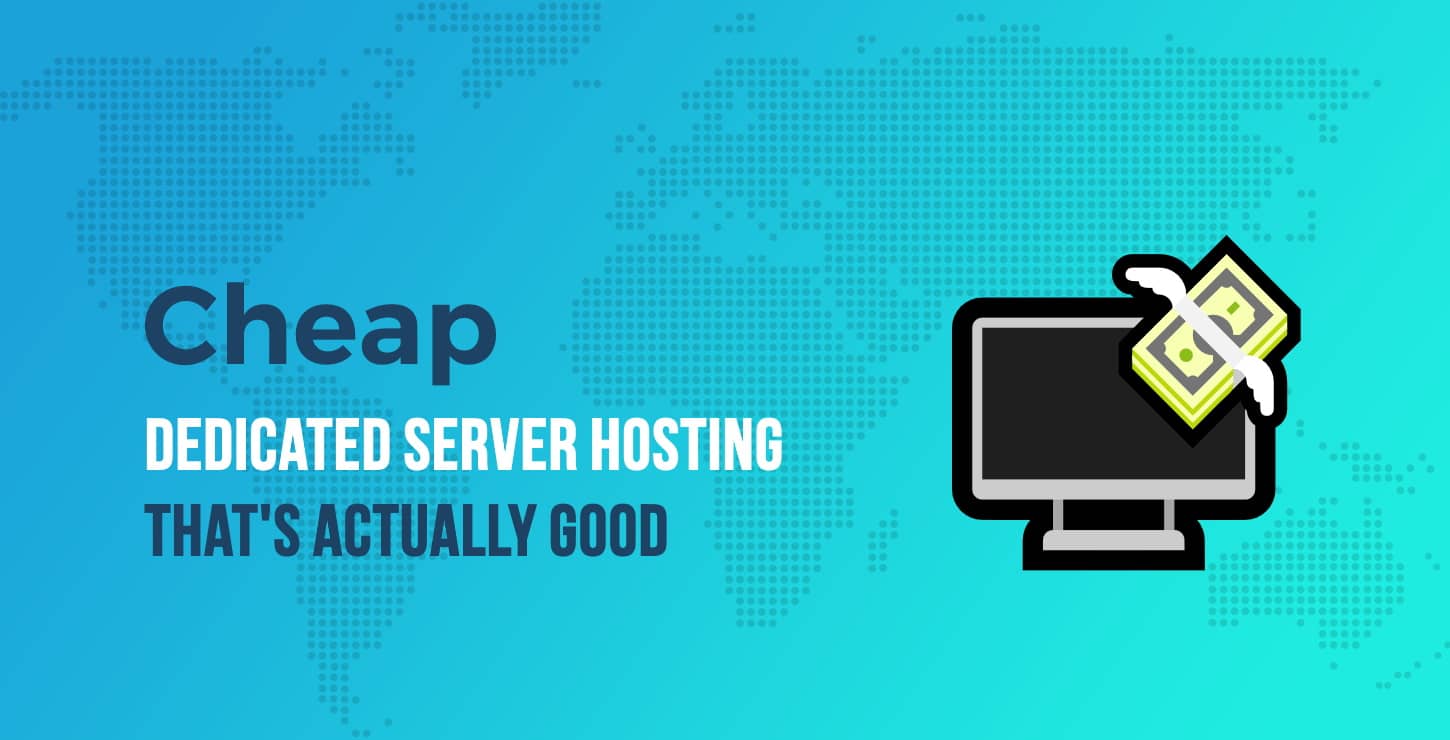 No time to read? Here’s a quick summary on the cheap dedicated server hosting options that you should look into first:

⭐ Top pick: Liquid Web – great if you want the best server configuration and don’t mind signing up for a two-year contract.

Mind you, it’s still going to be a rather expensive endeavor, but there are savings to be found. In this article, we’ll share the results of our research and introduce you to the five cheap dedicated server hosting plans we can recommend. Let’s take a look!

During the research, I found a sweet spot for ‘starter’ dedicated servers at around $100 per month. Each of the web hosts below offers at least one plan near that price point. However, keep in mind that you can only receive these rates with a long-term contract.

If you want to pay on a monthly basis, you need to expand your server budget to $100-200 per month. For each web host on our list, we’ll also include monthly pricing to help you make a better-informed decision.

These are the best cheap dedicated server hosting options that we’ll be looking at:

Bluehost is one of the most popular web hosts around and offers pretty much every type of plan you can imagine.

When it comes to tiers, it keeps things simple. With most types of hosting, you only get two or three options to pick from. That same approach applies to its dedicated hosting plans.

Bluehost offers two options below the $100-per-month mark if you don’t mind signing up for a three-year contract. Otherwise, the Enhanced server costs $199.99 per month. The basic Standard option is cheaper, but it comes with only 4 GB of RAM, which means we can’t readily recommend it.

A2 Hosting has a reputation for cheap plans. It also makes a big deal out of its servers’ performance. We know their Turbo-enabled plans tend to be fast. Fortunately, that feature comes by default with all the dedicated servers at A2.

The downside is that A2’s only dedicated server around the $100-per-month mark just offers a 2-core CPU. Plus, you only get that nice price if you sign up for a one-year contract. Otherwise, the cost jumps up to $149.99 per month. Plus, you’d also be wise to look into renewal costs before committing.

Although the clock speed is higher than Bluehost’s, the 4-core system should still be faster and better at multitasking, in general. Beyond price, A2 Hosting also offers a broad selection of dedicated server plans, including options with root access and managed hosting.

HostGator might not have a blemish-free reputation, but it’s important to note that a majority of its less-than-stellar reviews come from shared-tier users. With a dedicated server, performance is always going to be better unless your web host is doing something seriously wrong.

As far as HostGator’s dedicated options go, its cheapest server starts at $119 per month with a three-year commitment. On a month-by-month basis, the starting price goes up to $189.

For that extra money, you receive unmetered bandwidth and the fastest CPU we’ve seen so far. It’s also worth noting that HostGator is one of the only options on our list of cheap dedicated server hosting providers that enables you to choose between Linux or Windows for your operating system.

InMotion offers one of the broadest ranges of dedicated server plans you can find. Out of a total of six possible off-the-rack configurations, however, only one comes close to our desired budget.

That said, $115.69 per month goes a long way with InMostion. This plan includes a fast, multi-core CPU, the standard 8 GB of RAM we’ve come to expect, and your choice of storage options. You also get up to two hours of ‘managed hosting’ assistance with setting up your dedicated server.

If this is your first time tinkering with dedicated hosting, that extra support can come in handy. However, if you want to pay on a monthly basis, keep in mind that the price we quoted goes up to $146.59.

On paper, Liquid Web handily beats all the other cheap dedicated server hosting options we’ve seen so far. Unfortunately, its basic plan only comes down to our target budget if you’re willing to pay for a two-year contract. Plus, you’ll only get one dedicated IP address.

If you opt for monthly payments, the cheapest Liquid Web dedicated server will cost you $199 per month. However, for that money, you’ll have the best server configuration we’ve seen so far with a base plan, as well as managed hosting services.

Beyond hardware, Liquid Web also provides free integration with Cloudflare (one of our favorite CDNs), multiple choices for your control panel, and Windows or Linux for your OS. That said, keep in mind that its managed hosting service is only available for Linux servers.

What to look for in a dedicated server hosting plan

When it comes to shopping for dedicated hosting, you want to make sure you’re getting the most bang for your buck. Here’s an idea of what to look for in a quality plan, even on a budget:

Full access to your server:
When it comes to ‘budget’ dedicated server plans, a managed hosting service often isn’t an option. That means you’ll need to tinker with your server directly or work with someone who can configure it for you.
Being able to customize your server’s setup is also one of the key perks of a dedicated hosting plan. With that in mind, make sure you have full access before committing to a plan. Some hosts will disable root access for managed servers, but that’s not too common.
Multiple server configuration options:
Since you want to remain on a budget, you likely won’t be able to spring for the most high-end server configuration. However, you still want to have as many options as possible, in case you decide to upgrade plans later on.
As I already mentioned, managed dedicated servers usually aren’t an option if you’re on a tight budget. However, other configuration aspects to consider include server location, operating system (OS), security features, and other various settings.
Multi-core central processing unit (CPU):
Most web hosts use very specific types of CPUs for their dedicated server plans. If you’re not a hardware person, multi-core CPUs with over 2 GHz of processing power are a quality standard to shoot for.
The CPU is perhaps the most important component of your dedicated server. With a faster clock speed, your server will be able to execute tasks faster, which is particularly important for dynamic websites. For WordPress, we’ve had success using a modest, single-core CPU, which is a lot less impressive than what any of the plans in this post provide.
More than one dedicated IP:
If you’re planning to host multiple sites on your dedicated server, having IP addresses for each of them can come in handy. Depending on your needs, this may be an important factor to consider.
Most modest dedicated server plans come with at least a couple of dedicated IPs. However, you may have to decide if other features outweigh the importance of this one if you want to stay in budget.
A decent amount of storage:
Storage isn’t usually a problem with dedicated servers, but you still want to pay attention to what your web host offers. This is especially true if the website you’re going to host is large, or if you’re planning to host multiple sites.
Even standard shared plans these days provide 10–20 GB of storage as the baseline. You should be getting more than that with a dedicated plan.

It’s important to understand that since we’re talking about cheap dedicated server hosting, you’ll need to keep your expectations in check. However, you can usually get at least 8 GB of RAM and a 4-core CPU, even on a tight budget.

Additionally, managed server plans and custom builds simply don’t come at what most people would consider ‘affordable’ rates. The options we’ve featured in this post are primarily unmanaged.

Which of these cheap dedicated server hosting options to choose?

‘Cheap’ dedicated server hosting usually starts around the $100-per-month mark. If that doesn’t quite fit your budget, there are many less expensive types of plans you can opt for. However, if your website is at the level where you need a dedicated server to offer solid performance to your users, then the expense can be well worth it.

We’ve gone over a lot of data in this comparison, so let’s review the cheap dedicated server hosting plans we can recommend:

Most of the cheap dedicated server hosting options here are rather similar from a hardware standpoint. One standout, in this case, is Liquid Web. Its server outpaces the rest of the plans when it comes to CPUs and RAM. With that in mind, here are my final recommendations:

Do you have any questions about dedicated hosting for your website? Ask away in the comments section below!