Whatever the case, screenshots are required in many professions, so it’s essential to know about the best website screenshot tools + how to use them.

After much testing, we’ve decided on five of the best website screenshot tools in the market.

Some have simple user interfaces with Google Chrome extensions, while others are built more for developers.

In addition, we decided on a few free options, along with some premium ones.

Keep reading to see which are best for you!

URL2PNG boasts a mix of simplicity and powerful screenshotting tools into one neat package. It’s able to capture screenshots of any website directly from your app. 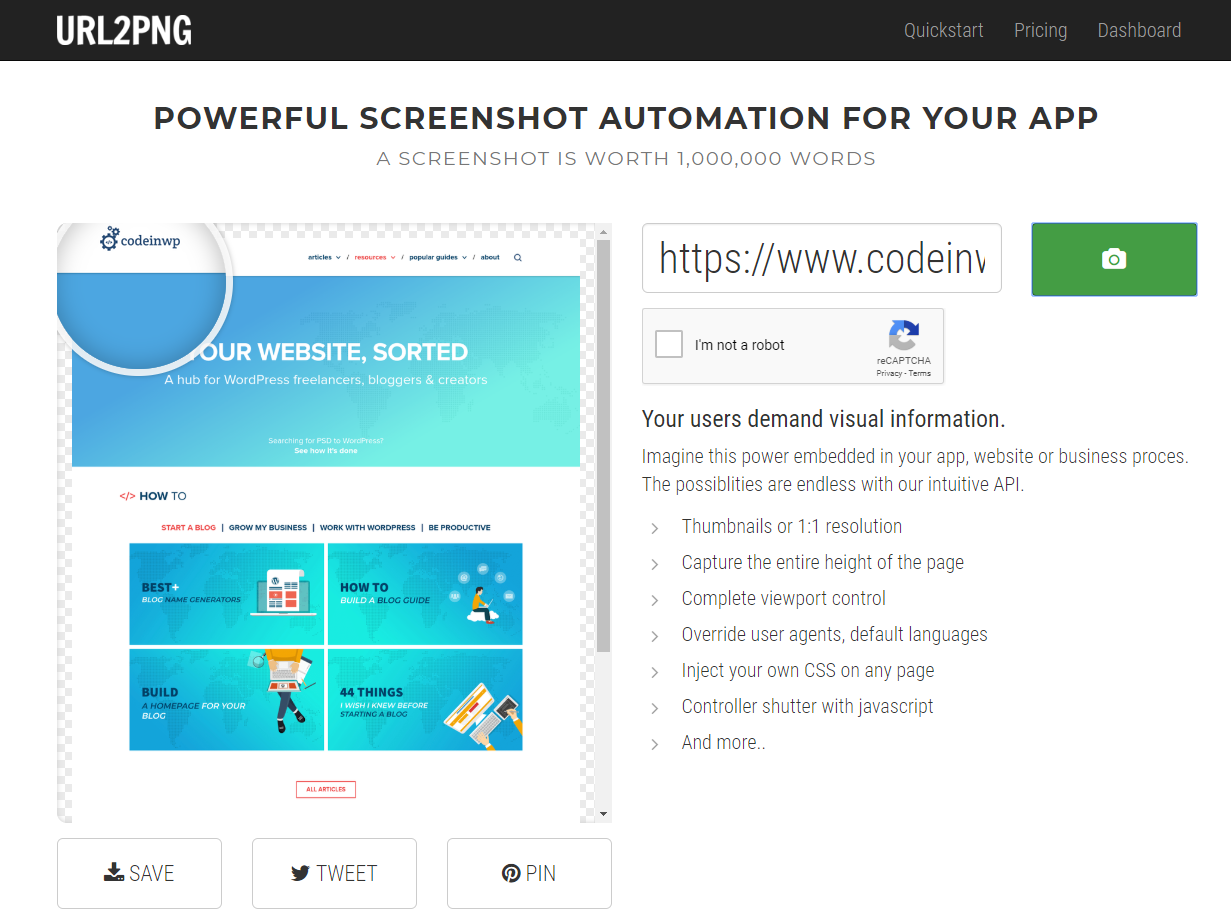 These are full webpage screenshots with several API keys depending on which language you need. The test drive on the URL2PNG website is nice to see how your websites come out, but the true power comes into play once you enter the dashboard filled with graph, web font, and video screenshot tools. 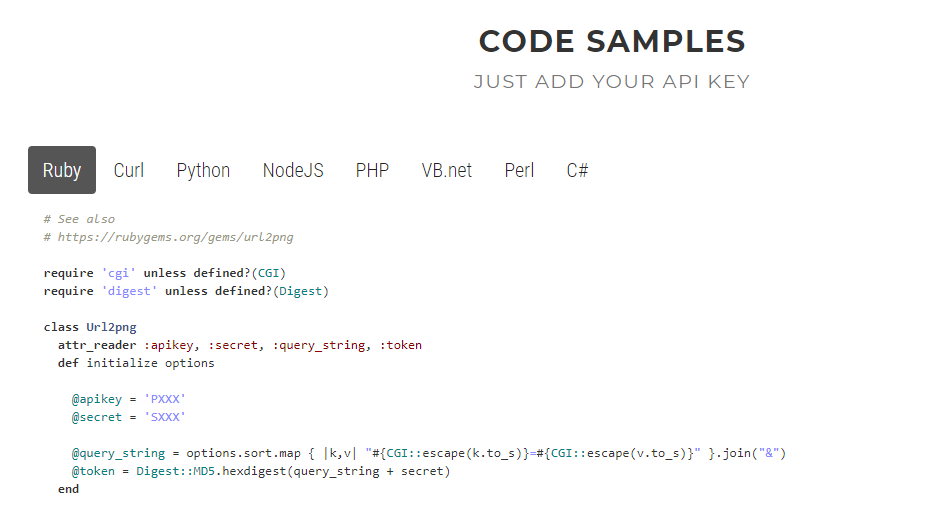 URL2PNG doesn’t have a free account, but the plans are (kind of) reasonably priced and based on how many screenshots you plan on generating. An Enterprise plan is provided for companies with lots of workers who need premium support and wouldn’t mind some volume discounts. For that, you’d have to contact URL2PNG to figure out a price.

As for the regular plans, here’s what you have:

Although you can quickly produce beautiful screenshots from your own app or website, don’t expect any annotation tools built into it. Also, basic screenshotting options, like Google Chrome extensions, aren’t provided.

And, of course, the elephant in the room is the lack of a free plan. If you’re taking screenshots only occasionally, $29 seems like too much.

Browshot is an impressive alternative to URL2PNG with a free tier and potentially better pricing depending on how many screenshots you plan on taking. 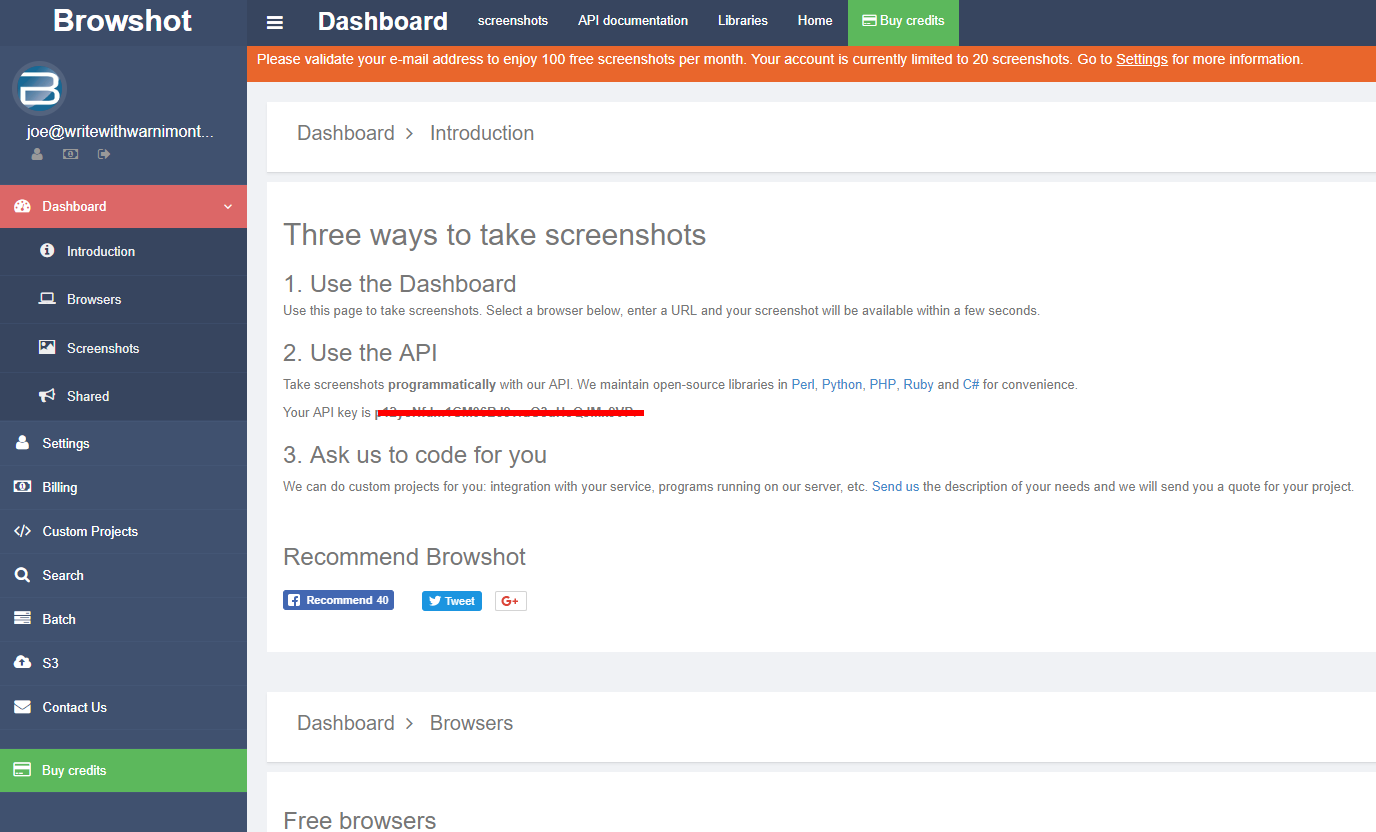 The dashboard is one of the cleanest you can find for taking screenshots, especially if you’re in using the API or getting bulk screenshots from a list of URLs. 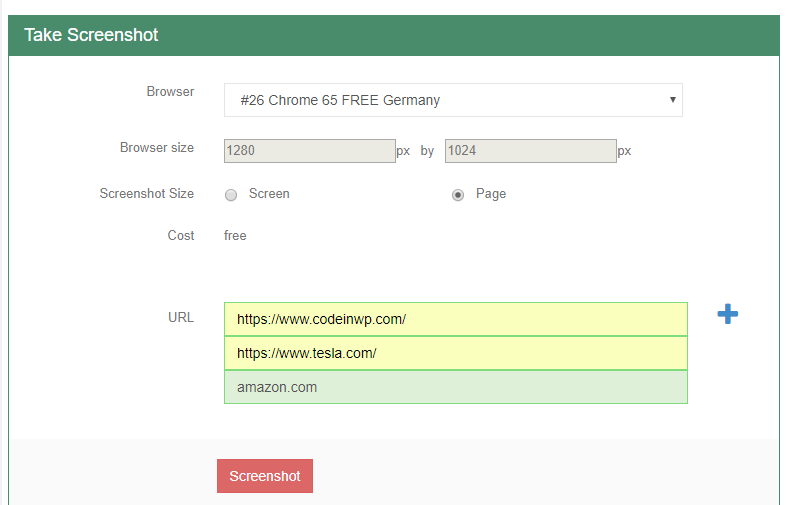 A strong advantage of Browshot is the Free Pricing Plan. You only get 100 screenshots per month, but it’s an excellent start for testing out the features. Also, some smaller companies or developers might only need that many.

The Premium Plan offers better screen resolution, mobile support, simultaneous screenshots, server APIs for more countries, and a one-credit per screenshot pricing plan. Bulk discounts are provided, but the prices start at $1 for 10 credits. As an example of how the bulk pricing works, Browshot sells 60 credits for $2.

Similar to URL2PNG, annotation and quick browser extension screenshots aren’t available. Also, the screenshots could get extremely expensive since there aren’t any preset monthly plans in place.

The Fireshot screen capture solution offers several browser extensions, including ones for Chrome and Firefox.  This makes it much easier for the average user to install within seconds and get started with full page website screenshots. Not only that, but you don’t have to pay anything for the Lite extension version.

For this example, I’m using the Chrome extension, which shows up in the upper right-hand corner of the browser. Upon clicking the extension button, it reveals a few options for capturing the entire page, the visible part of the website, and a specific selection. There are also some hotkeys to capture a screenshot with the keyboard. 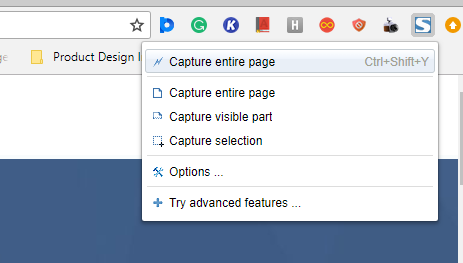 After the screenshot, Fireshot Lite has several sharing and saving options, such as saving to your computer or sending in an email. 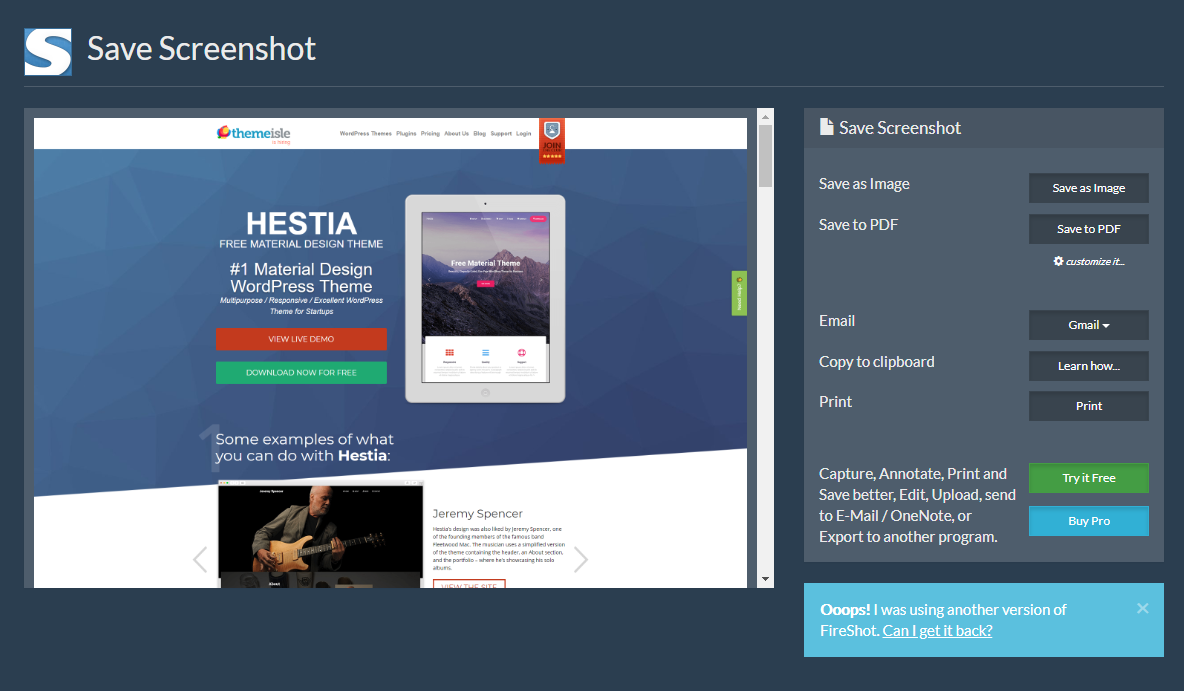 Fireshot Pro opens up other features, such as annotations, uploads, and a OneNote integration.

The Fireshot browser extensions are free, but you can upgrade to Fireshot Pro for a one-time fee of $39.95.

Fireshot doesn’t provide access to an API, leaving developers without a way to integrate with apps.

Screenshots.cloud sells screenshots as a service, using a CDN-backed API to capture real-time screenshots in seconds. 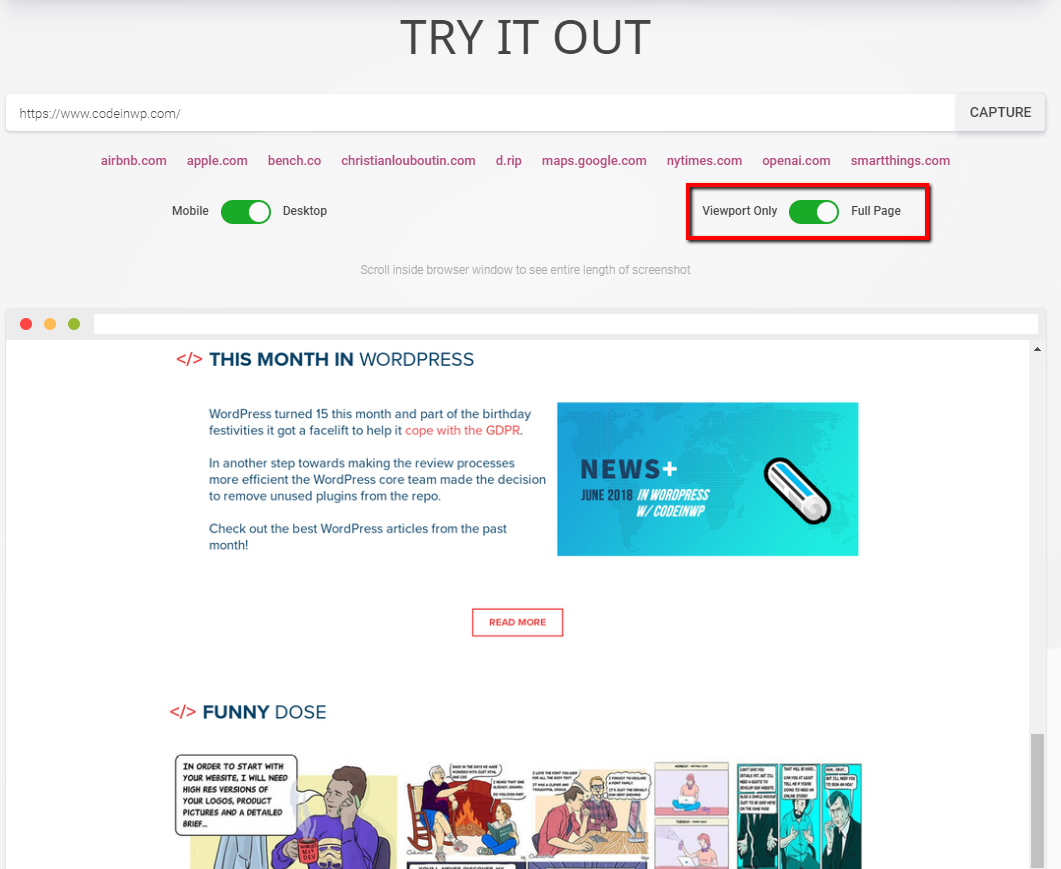 A test of the service is available on the Screenshots.cloud website, along with information about how developers can automatically take screenshots of products without much work on their end. 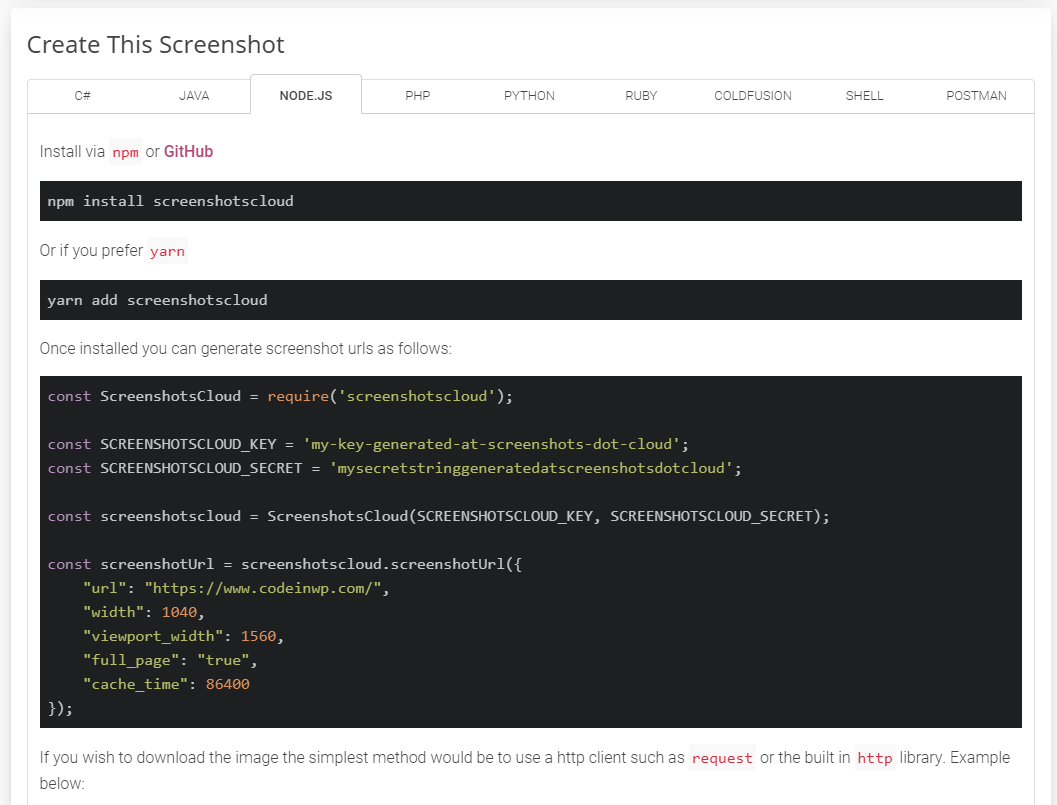 A 7-day free trial is available for testing out Screenshots.cloud. After your trial, you choose from three primary pricing plans, or you have the option to go with the Custom Enterprise plan.

Here are the standard plans:

Screenshots.cloud offers less accessibility, similar to most screenshot services with an API. It’s made for rapid-fire, bulk screenshots in a development setting as opposed to individual screenshots with annotations.

1Click Screenshot is the most affordable option on the market, as it provides an open source tool for capturing individual website screenshots without any price tag. 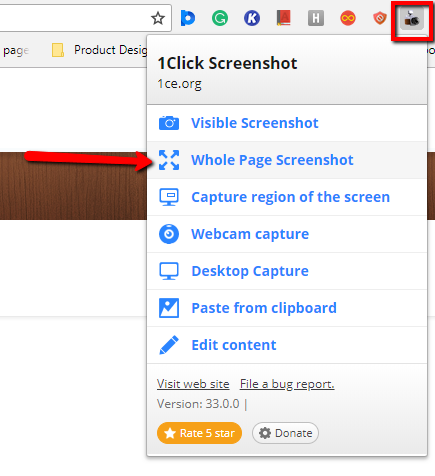 1Click Screenshot comes as a Chrome extension, with annotations and even some handy features for webcam and region capturing. 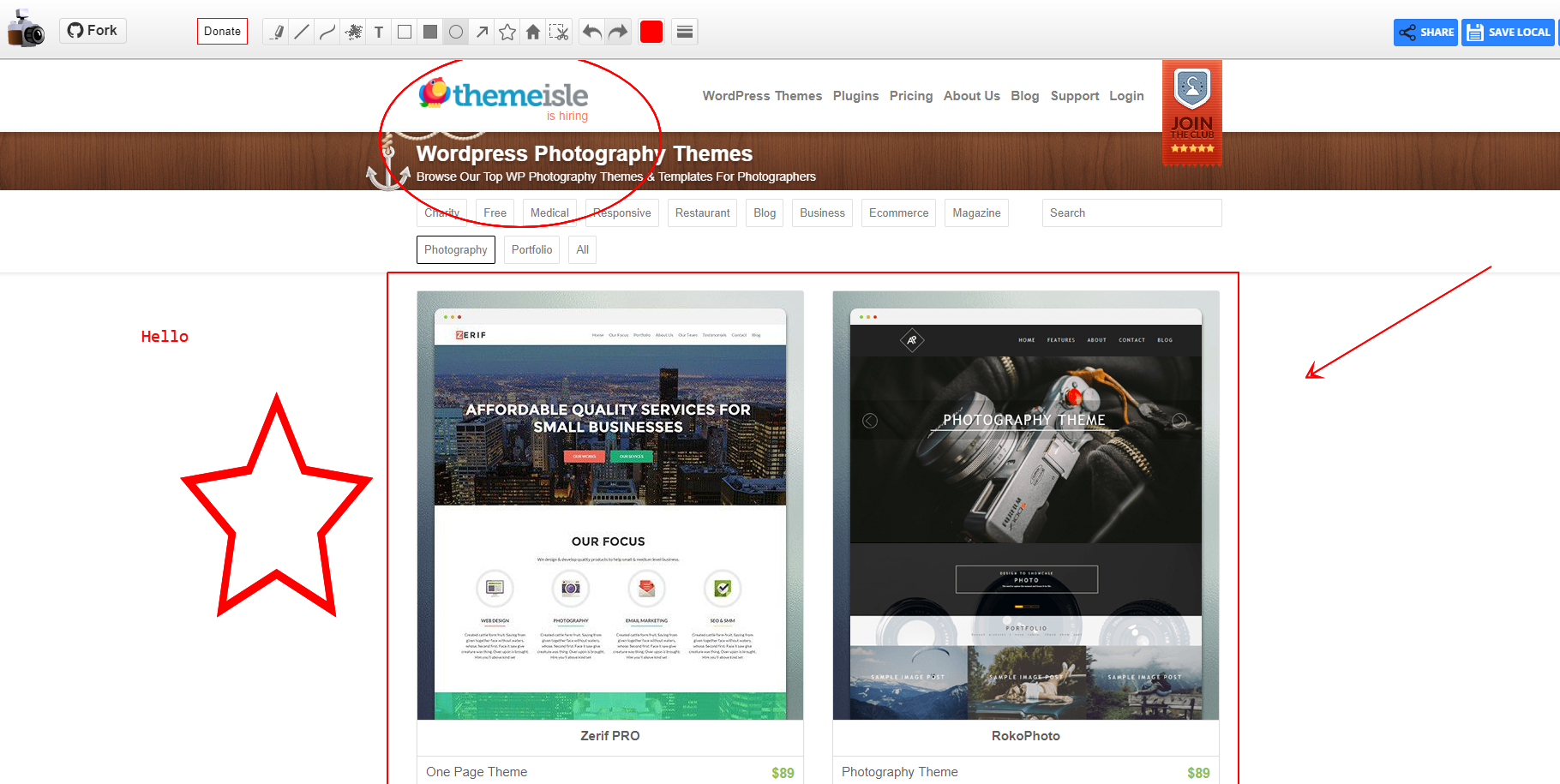 You don’t have to pay anything for 1Click Screenshot.

You’re unable to tap into any API and automatically take screenshots of your projects. There also aren’t any keyboard shortcuts to take a screenshot. Finally, there aren’t any sharing tools except a URL to copy and paste.

Bonus: What to look for in a website screenshot tool

Your requirements for a website screenshot tool vary depending on what you’re using the screenshots for and how you’d like to take them. For instance, a writer like me wants a quick browser screenshot extension with hotkeys and annotation tools for rapid production.

On the other hand, you may want to take screenshots on autopilot / with an API. With this, you’d be able to take full screenshots from any live website in real time. This makes the most sense for a developer.

Each of the best website screenshot tools has its different features, but here are some of the options we’re looking for in general:

The list could go on and on, but this is a good starting point when looking into the best website screenshot tools. The main goal is to get as much flexibility and speed as possible. With full page screenshots, annotations, and tools for sharing directly to servers and actual people, you’re on the right track to finding the solution that works best for your job.
We’ve also compiled a list of the best online image management software for business and personal usage.

Which of the best website screenshot tools is right for you?

Here are some final thoughts to help you make a decision:

If you have any questions about these best website screenshot tools, share your thoughts in the comments below.

If you're looking for only the best free WordPress themes in the market for this year, then you're in the right place. We have more than 60+ such themes for you right ...

How to Make a WordPress Website: Ultimate Guide for Beginners and Advanced Users Alike

How to Start an eCommerce Business From Scratch (In 10 Steps)